Where tea is sweet and accents are sweeter; summer starts in April; front porches are wide and words are long; macaroni and cheese is a vegetable; pecan pie is a staple; Y’all is the only proper pronoun; chicken is fried and biscuits come with gravy; everything is darling and someone is always getting their heart blessed. -unknown

If you could go back, and change one thing about yourself, or your surroundings in high school, what would that be? It could be physical, emotional, spiritual, etc. I am developing a few devotionals that I hope to share soon, but was wondering what others thought on the matter.

How do we see ourselves?

I saw this video on Facebook a couple of days ago, and I have thought about it several times since then. Had to share. How do we see ourselves?

Along the lines of my previous post, I had to share my new favorite makeup brush. It is Sigma's F82 Round Kabuki brush. It is awesome! I love it for applying foundation. I would have been happy with the F80 brush as well, but I got a great deal on this on eBay.  Just had to share =) (and no, this isn't some blog to try and win something.....I really wanted to share the love I have for this brush) 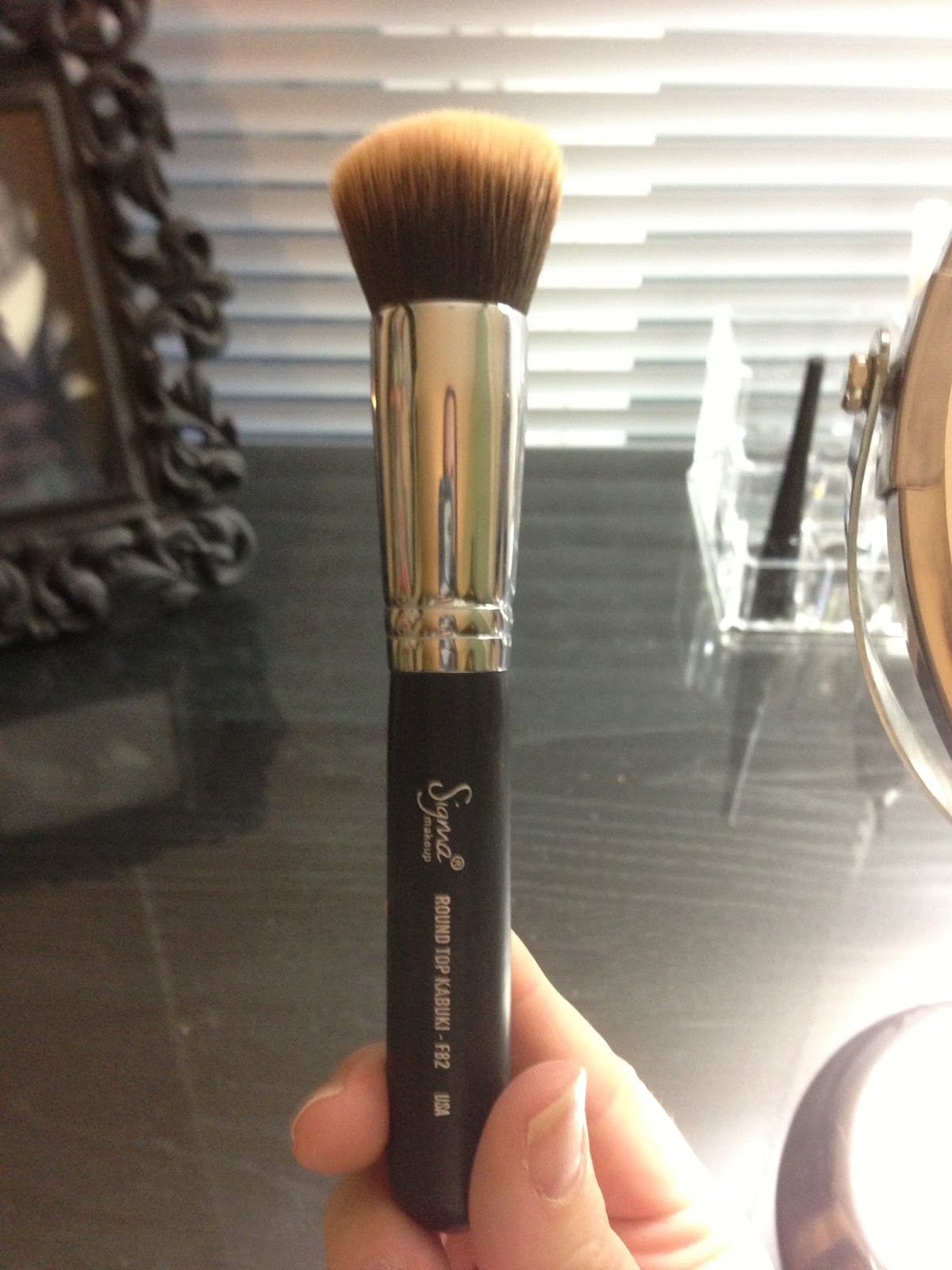 I wanted a change as far as makeup and skincare goes.  I have been using the same types of things for years.  I am not getting any younger, and figured I needed to start taking better care of my skin so that 30 plus years from now, Lord willing, I won't wish I had done more in my youth.  So I am starting now.  With that comes even more change......
We have a master bathroom that is on the smaller side when you consider the house was built in 1998.  It is fine, but again, I just wanted a change.  So below was my project last weekend.

This was the space before.  Notice the junk pile to the left :/ 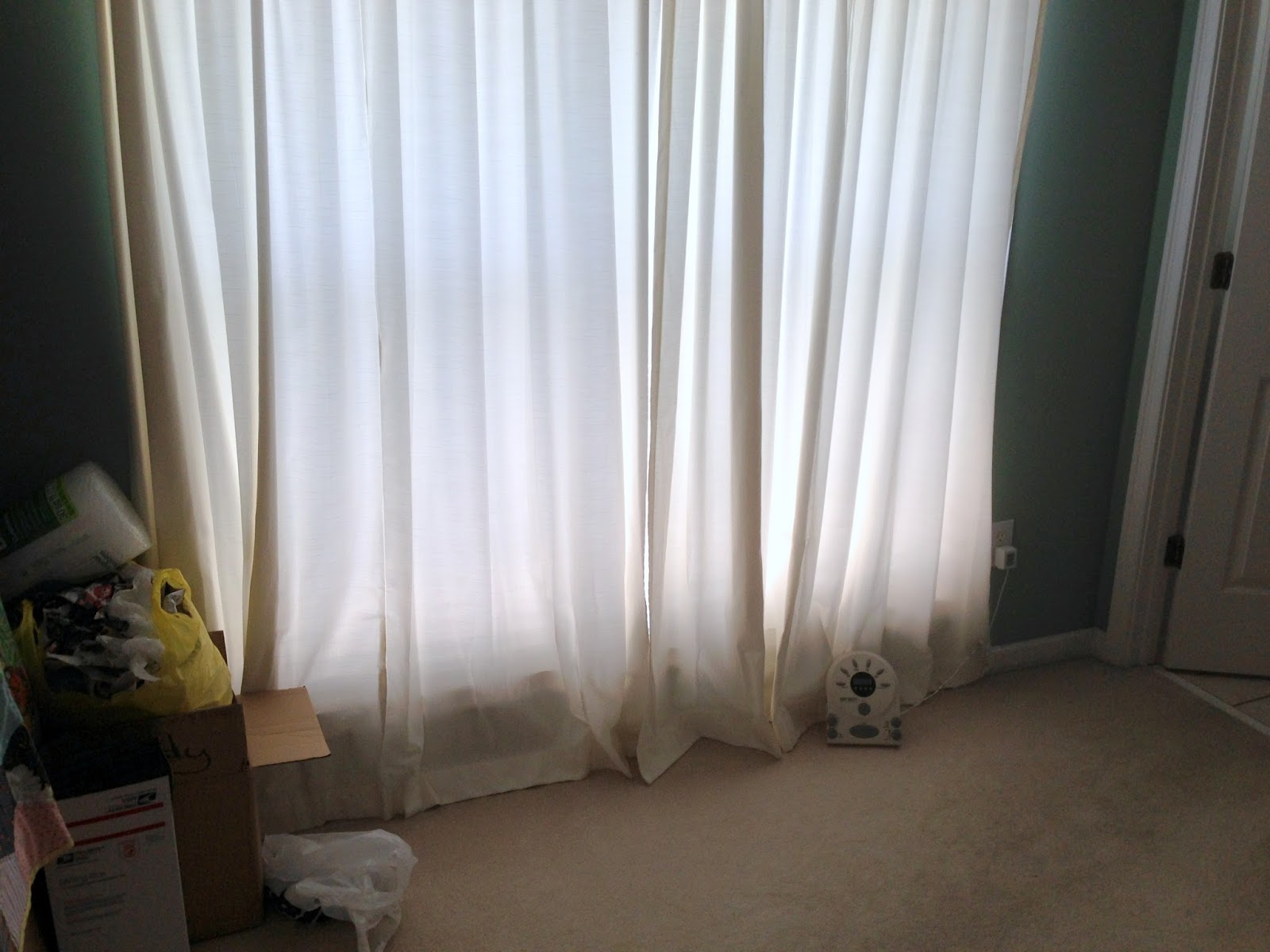 This was the space when I was done.  YAY! A vanity for me!! 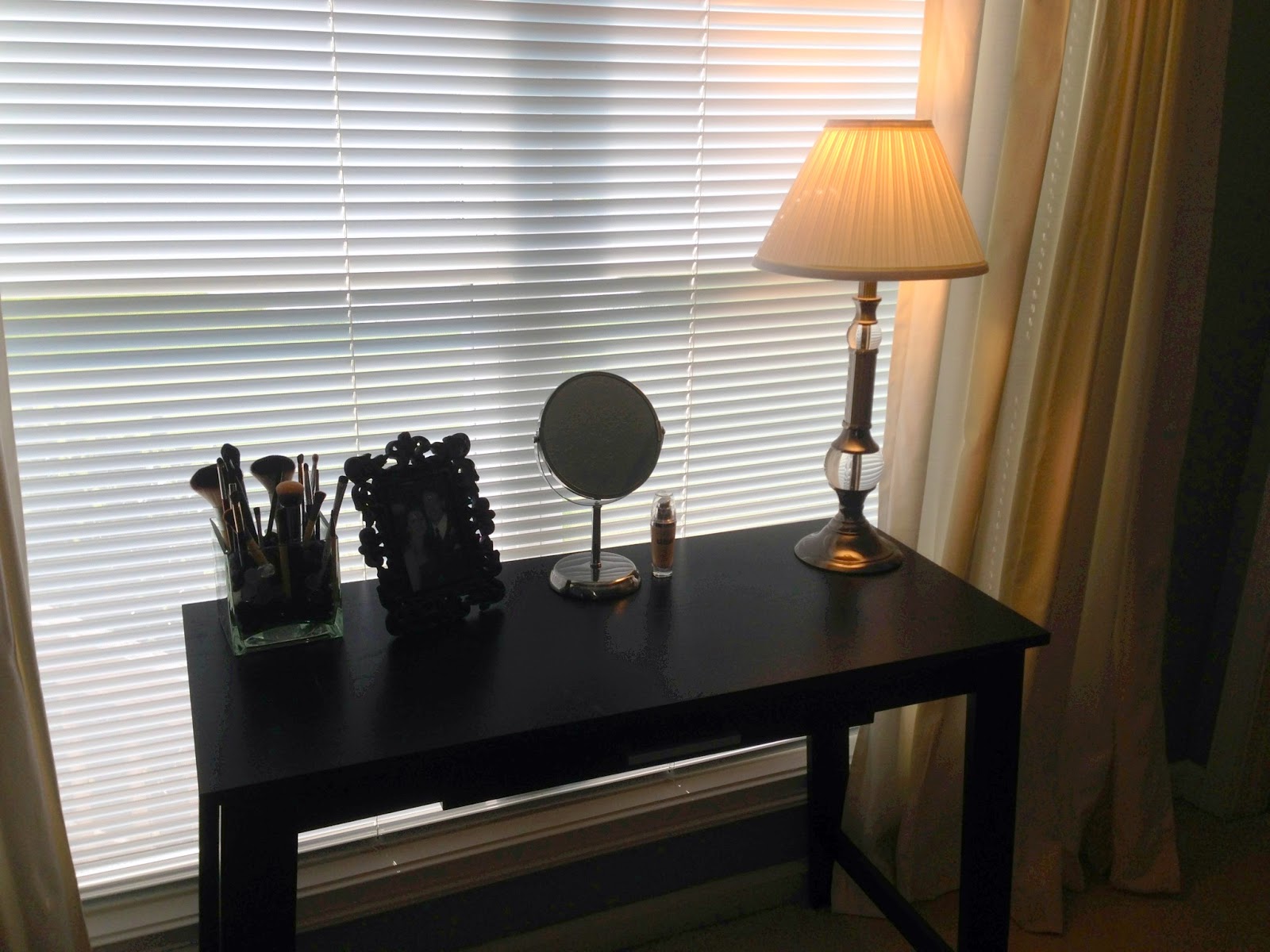 The bowl was purchased at Walmart to hold my brushes in.  I added decorative marbles to hold them up. 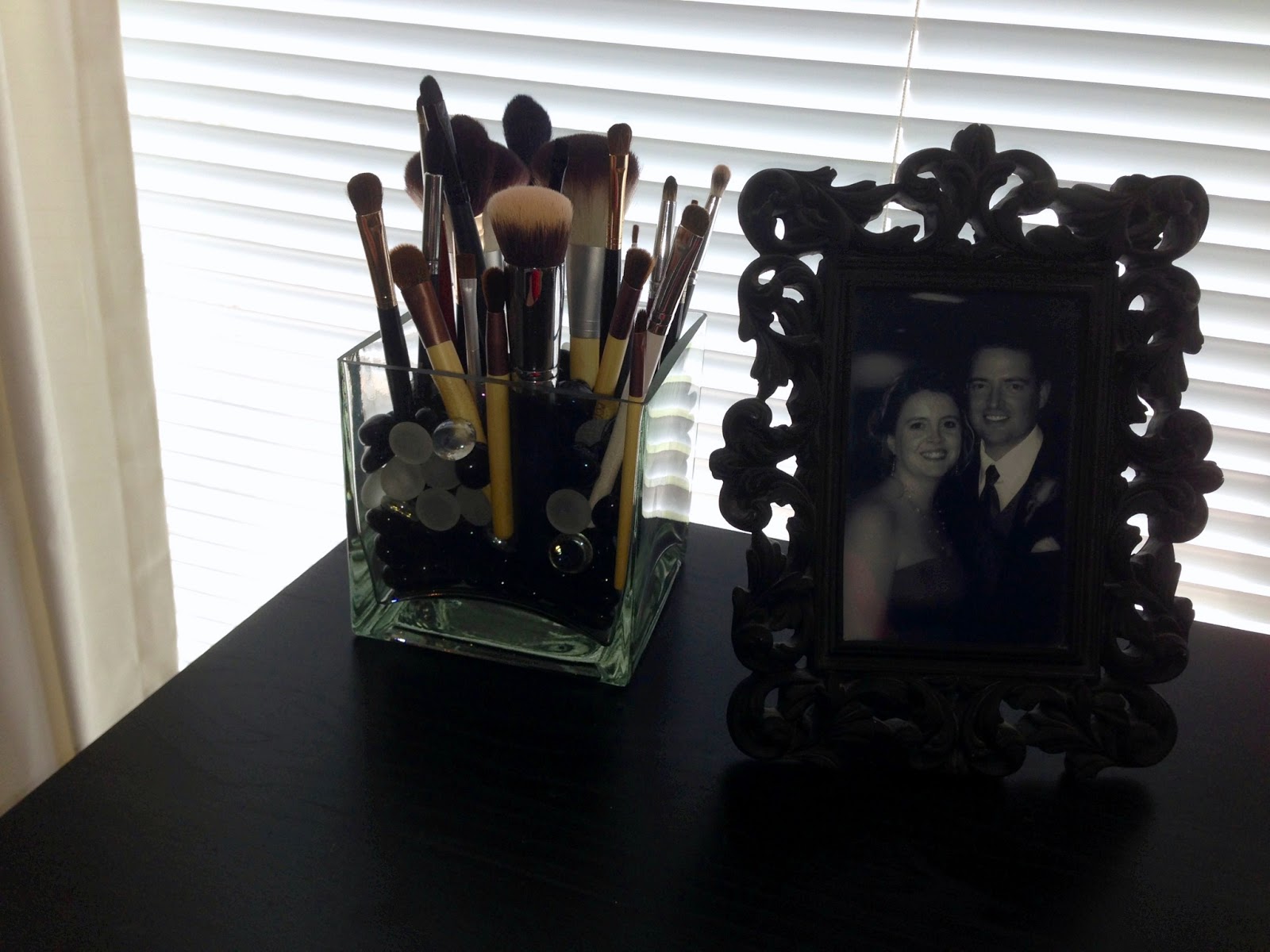 The lamp was also purchased at Walmart.  I swapped out the shade that I bought for this one that was on another lamp, because it helped give off more light. 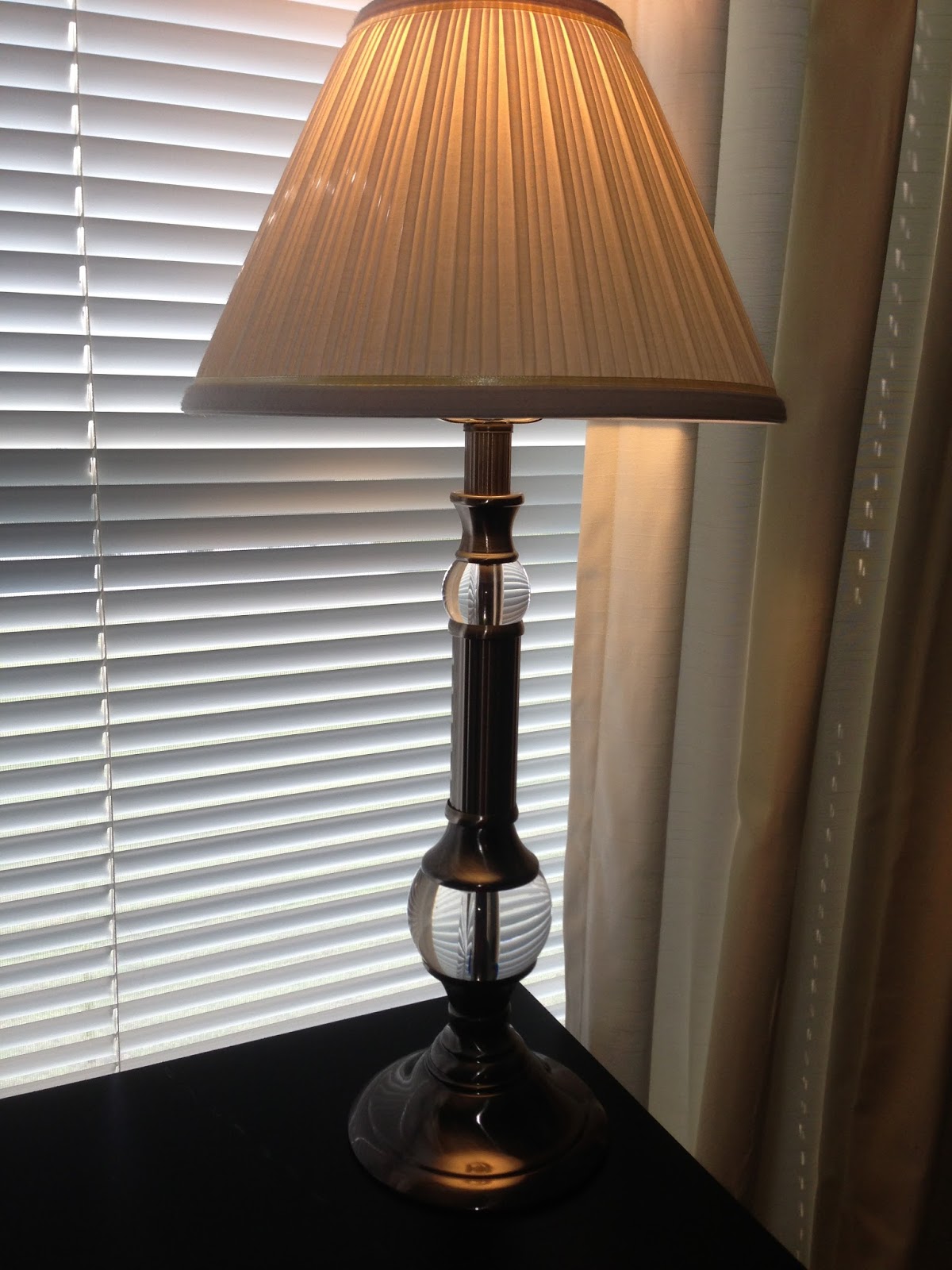 The desk is simple, yet perfect for my needs.  I haven't found a chair yet.  That is this weekend's project. 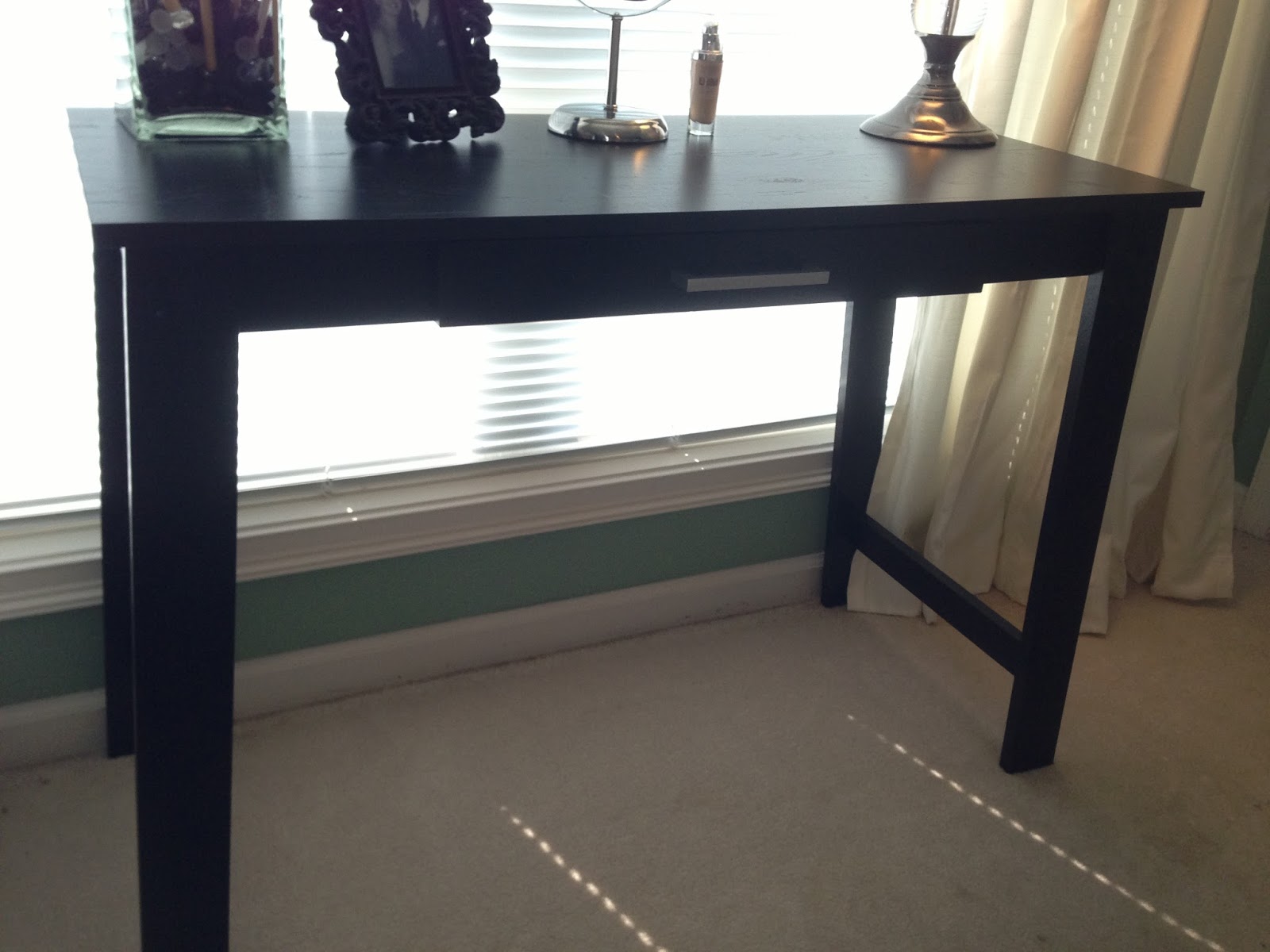 Right now everything is in that drawer, but it is already overflowing.  Next on my list is an acrylic organizer.  Then, I think I will be done.  Then on to the next project.  Hmmm......

Reese shared with me something he had been thinking about.  I asked him to say it again so I could video it.  He had been telling me about lizards. Why lizards? Who knows. He just came up with this out of the blue. His observations on lizards. This is how his mind works...

If you didn't understand....it is him telling me that lizards faces never change, no matter what is going on. Um? Ok.
at 1:38 PM 1 comment:

We spent a couple of days with Amy and Phil in North Georgia at the beginning of the summer.  We made outings each day to various Chattanooga sights. 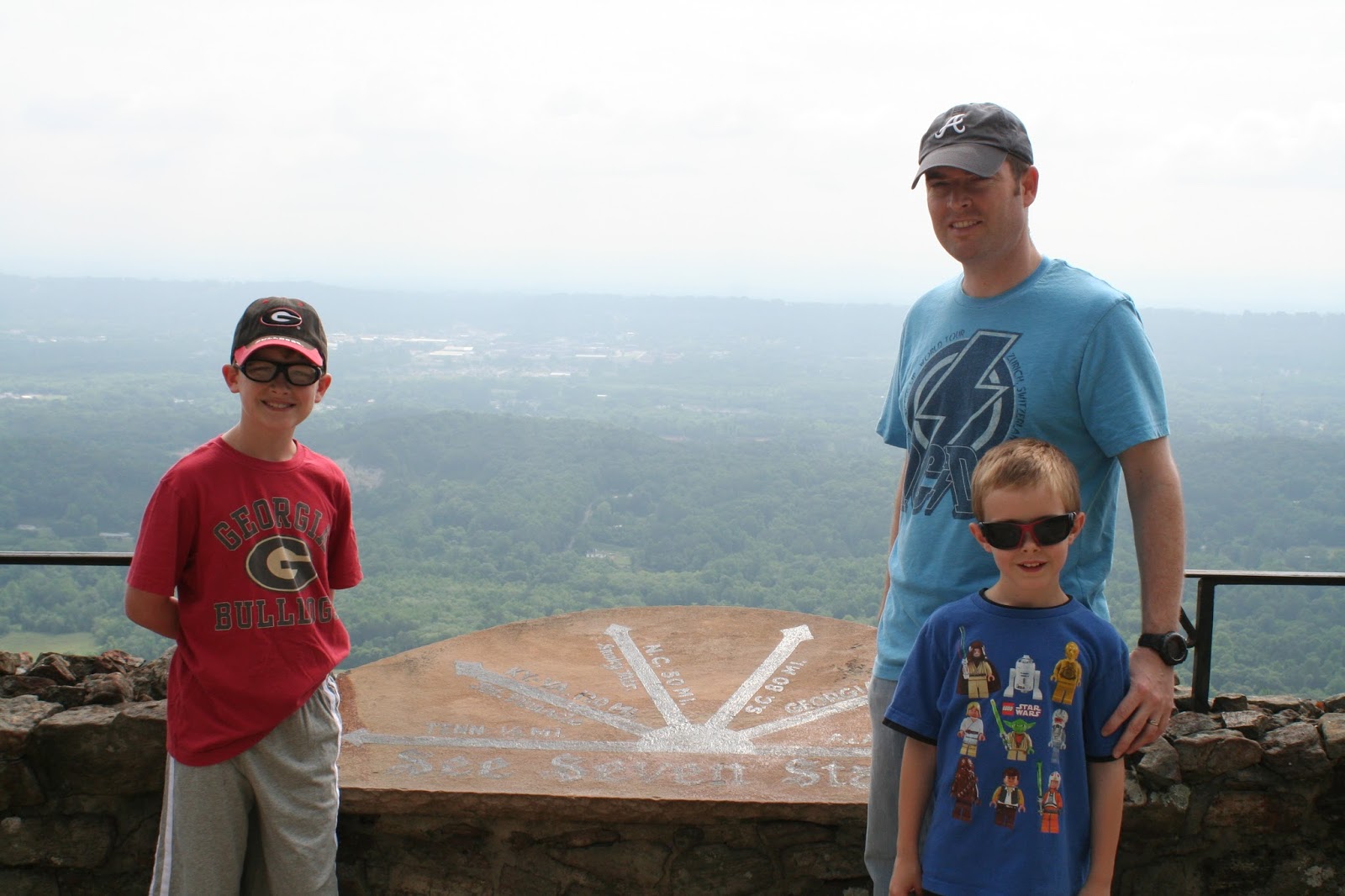 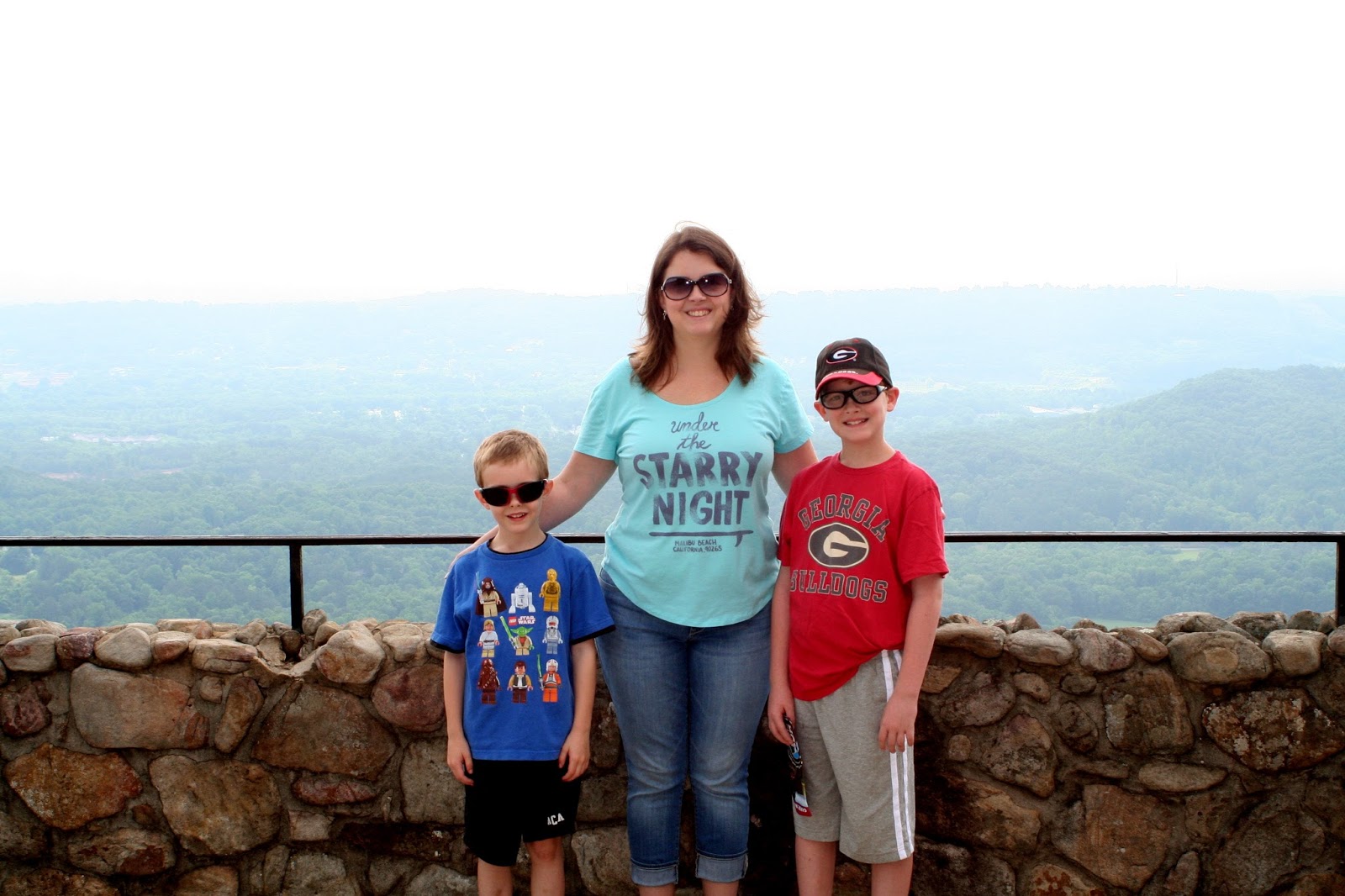 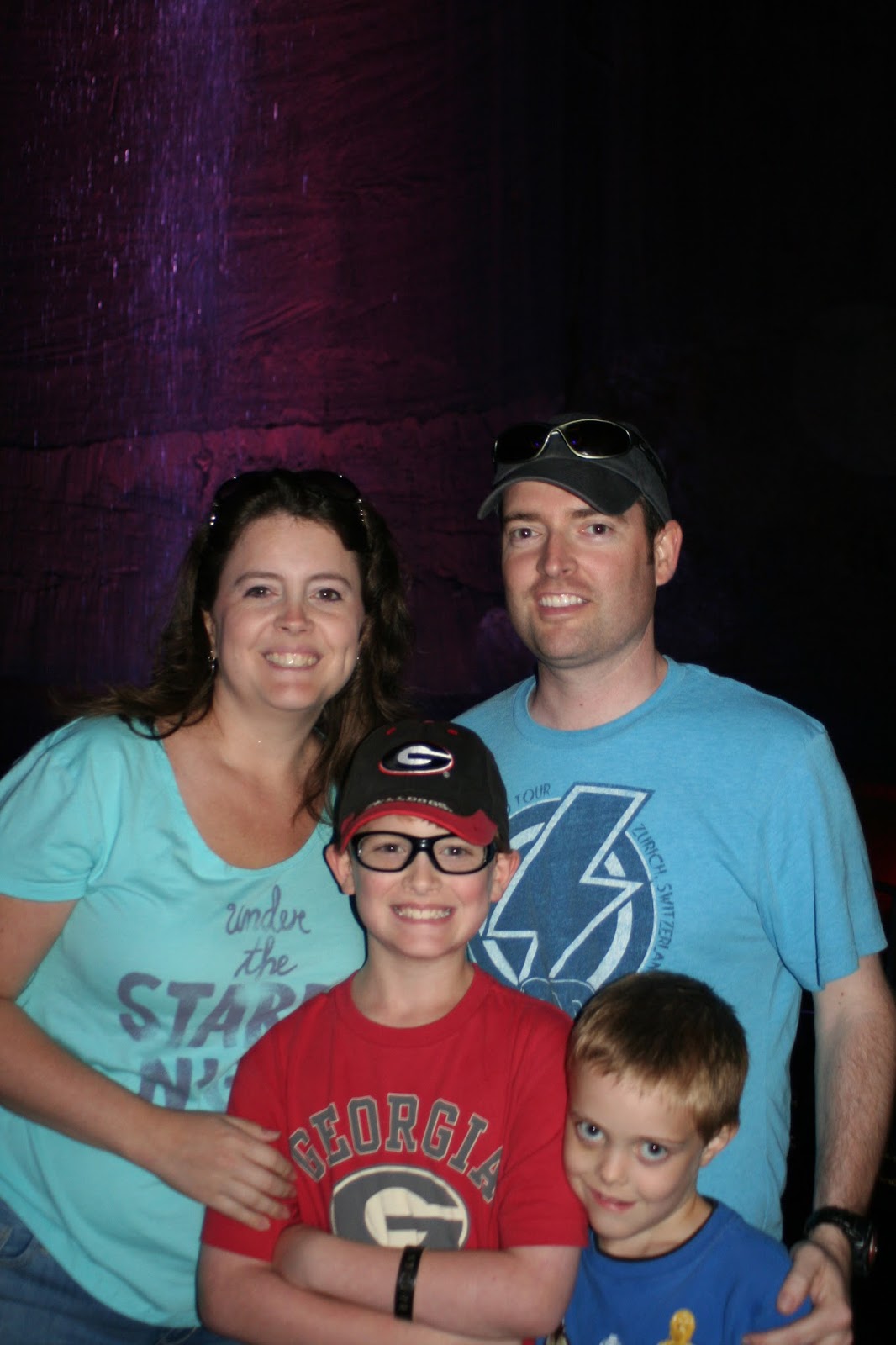 We visited Ruby Falls, Rock City, the Incline Railway, the Tennessee Aquarium, and got to spend some quality time with Amy and Phil.  I definitely want to do it again!!!

Our Lads to Leaders weekend started off a little rocky......(I should have known something was up.)


We hitched a ride to Atlanta with Brent's mom because she was going to visit the grandparents for the weekend.  She gave Reese some Dramamine ahead of time because he is likely to get car sick.  So off we go.  We get to LaGrange and travel 2 miles in one hour, due to an awful wreck.  Reese slept the whole time.  We stopped for supper and he told me he was cold.  (Sign number 1)  He only ate a little bit of food. (sign number 2)
We continued on our way to Atlanta and he fell asleep again.  (sign number 3)  When we got close to the hotel I woke him up and he just wasn't himself.  The traffic was AWFUL around the hotel.  I asked Melany to pull onto a side street and just let us out.  We could walk half a block to the hotel.  When we got out, Reese started shivering all over and crying.  UH OH!  I quickly unloaded all of our suitcases, loaded Brooks up with half and off we went.  I stopped along the way and gave Reese a pep talk that he could make it to the hotel.
Once inside, I got the boys to sit on a couch while I went and checked in.  The lines were awful!  I debated on whether or not to go to the concierge desk and explain that I needed help and into a room quickly, but I didn't.  We made it into the room and Reese just fell on the bed.
I have written more details than I intended, but needless to say, I looked to my friends for help.  I asked on Facebook, in our church group, if anyone had a thermometer.  One of our elders went and bought one for me.  I also asked Julie to help out the next morning with Brooks while I stayed in the room with Reese.  She went above and beyond (as she always does in our friendship.)  It was so comforting to know that you have a whole family at the ready to help!
What is weird is that Reese was fine by the next afternoon.  I guess it was just a virus.  This has taught me to always bring the entire medicine cabinet with me, including thermometers!!!
The rest of the trip was less eventful, but no less fun.
Reese had Bible reading on Friday, and he did real well.  Brooks was part of a puppet group that competed Friday afternoon.  His group won first place!  They are such a talented group of kids.
﻿ ﻿On Saturday morning, we went to Brooks' speech competition.  There were less kids competing than expected.  As soon as the doors shut, I watched Brooks count the competitors in the room.  There were only three, which meant that they would all place in the competition.  He let out an audible "YES!"  He came in second.  He did really well and we are proud of him.  He even got to give his speech in chapel at school a couple of weeks ago.  This is something that I would have been scared to death to do at his age!!!
﻿ ﻿
Both boys competed in song leading.  They both did well.  Again, I couldn't do it.  I asked Brooks if he ever got nervous, and he said no.
Sunday morning we worshiped with over 1500 others!  They even had to bring in more chairs!  What a blessed day it was!

Now baseball season has started and we are off to new adventures..... 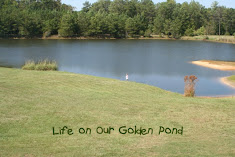